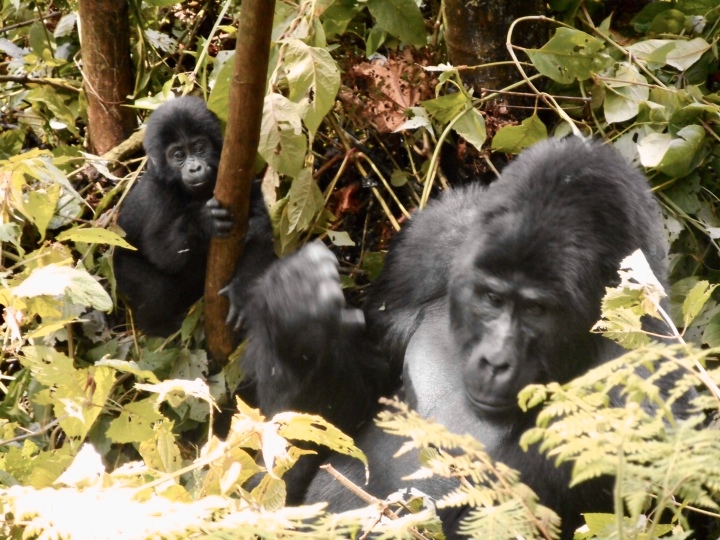 Another part of my retrospective series. On my second trip to Africa in 2017, I capped off my trip with a visit to Uganda. My friend and I were referred to a great local tour operator named Dan, who arranged a private customized 5 day tour for us, the highlight of which was the highland mountain gorilla trek.

But first, a taste of safari

Uganda isn’t as well known as neighbouring Tanzania for its safari circuit, but there actually are some decent options for safari here. We started our tour at Queen Elizabeth National Park, which is located in southwest Uganda and is the country’s most visited national park. It is home to the African buffalo, Ugandan kob, hippopotamus, Nile crocodile, African bush elephant, African leopard, lion, and probably more. We were awoken at an ungodly hour before sunrise to head out for our first half day game drive. The wake up was dreadful but worth it in the end. Saw a whole lot of creatures, although unfortunately no cats that day. As an aside, I actually managed to capture these shots using a cheap Nikon Coolpix point and shoot camera.

Next we went on a boat safari along the Kazinga Channel. This is a 32 kilometre wide channel linking Lake George in Uganda, and Lake Edward which is on the border between Uganda and the Democratic Republic of the Congo. Lots of hippos!

We also stopped at Katwe Salt Lake just outside the park, where salt is ‘mined’. Each divided section is an individually owned plot.

Finally, we reached the day of our much anticipated mountain gorilla trek. This would later turn out to be the climax of the trip and also the most harrowing experience I’ve ever had in my travels!

There is a population of African mountain gorillas found in Bwindi Impenetrable Forest National Park which currently numbers at about 300. The entire population of mountain gorillas is somewhere around 880, with the remainder found in Rwanda and the Democratic Republic of the Congo. Uganda is probably the safer and more popular destination for gorilla trekking.

We stayed at the really nice Rushaga Gorilla Camp lodge.

On the day of our trek, we headed over to the park and were split up into several groups with the other visitors, about 8-10 people per group. There are seven gorilla families within the park that have been habituated to humans, and their day to day movements and locations are tracked by park staff. Each group was assigned to trek toward one of these habituated families.

We headed off on our trek, which was quite challenging. There were clear paths at first but we quickly delved off into true bush territory where the guide would have to clear the brush with his machete as we walked. It took a good couple hours uphill before we finally reached the gorillas.

We tracked the Nshongi group which is the largest habituated gorilla group in the park. There are apparently 25 members of the group but we must have seen a subgroup as I only recall the silverback male, an adult female, 2 juveniles, and 1 male infant.

It was really incredible to see these creatures so up close. And by up close, I mean within 5-10 feet with no barrier. This is real wildlife in its natural environment.

We watched the gorillas for maybe about 30 minutes to an hour, and then started heading toward the trail going back down. This is when we had our insanely frightening encounter.

As our group turned the corner around a shrub, we must have spooked the adult female. I was at the back of the line (closest to the park rangers carrying rifles!) when I heard a low growl and everyone jumped back. Another girl and I started slipping down a hill in the midst of all this commotion. Apparently the female had started to charge!!!

I don’t know what happened to stop her from mauling us to death, but we all survived to tell the tale.

Needless to say, we were all keen to start our hike back ASAP. Lo and behold, a torrential downpour of rain then started. Of course, my shoes weren’t waterproof and I learned that my jacket was also pretty much useless for heavy rain. It took another couple hours of slipping downhill in mud and rain until we got back to the park meeting spot.

My friend and I were done for the rest of the day. After a seemingly neverending drive, we arrived at our hotel situated near the breathtaking Lake Bunyonyi, left with memories that will surely last a life time.

To date, my trip to Uganda for gorilla trekking is still the most adventurous thing I’ve ever done. I’d also say that it was a truly once in a lifetime experience, because I will never be going on another gorilla trek again. That being said, we were well taken care of by our tour guide and the team at Bwindi. We stayed in very nice accommodations through the tour and Uganda is a beautiful country, which is quite politically stable and a safe place to travel. Highly recommend.

Shortly after my return home, I did make sure to invest in a super waterproof Gore-Tex soft shell coat and hiking shoes. 😏

4 thoughts on “Uganda see these gorillas”

This site uses Akismet to reduce spam. Learn how your comment data is processed.

Hello! I’m a 30-something female traveller based in Toronto, Canada making my way around the world and documenting my travel adventures for all to see. [...]

© 2019-2020 I’ve bean travelling. All rights reserved. Opinions and images are my own unless otherwise referenced.

I’ve bean travelling is a participant in the Amazon Services LLC Associates Program, an affiliate advertising program designed to provide a means for sites to earn advertising fees by advertising and linking to Amazon.com.